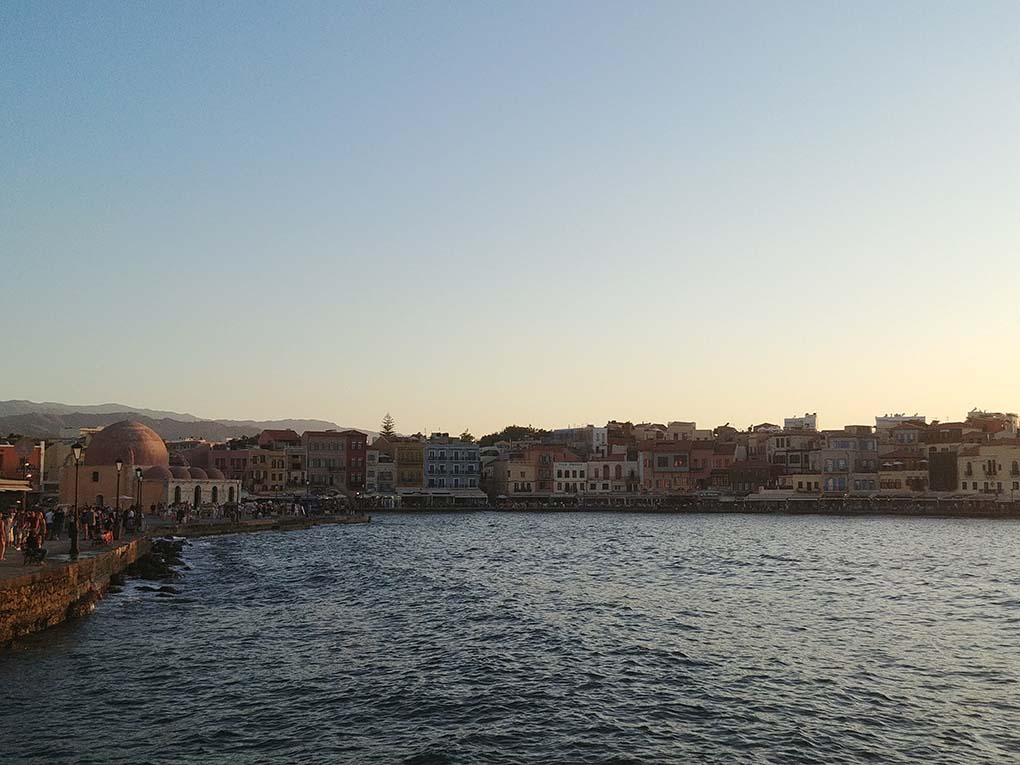 Crete is of my favourite places in Greece and I have so many reasons for that! It is a place that I am really amazed by its beauty, simplicity and wildness.

On this post, I will try to describe the things that you must check when you visit Chania. If you want to explore the Chania region, you can read here the post with our 8 days itinerary in Chania region!!

Also, if you are looking where to stay in Chania, you can check here our detailed article about the best hotels in Chania!

The part of the town that gathers all the attention is the old harbour. There, you will just walk around the picturesque alleys with a camera on your hand. Note that it is not so big area so you can easily go everywhere. I just recommend to go through the main attractions but then put your GPS on your pocket and just stroll around.

#Take photos of the famous #Lighthouse! 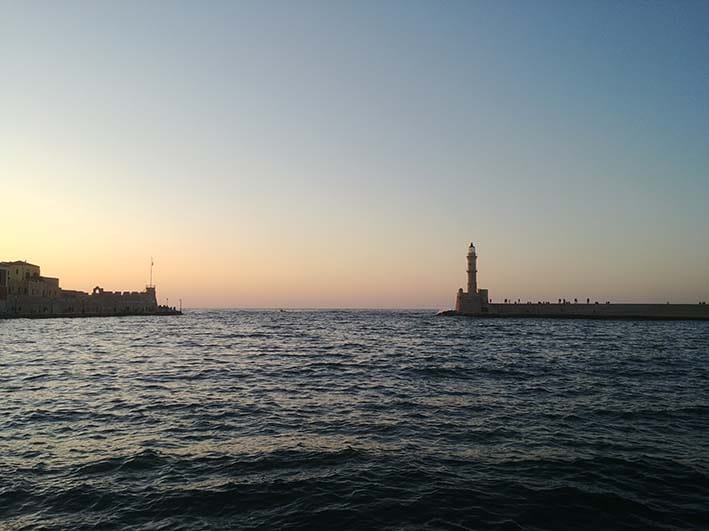 What should I say about this beautiful Lighthouse? The original Venetian lighthouse was built around the late 16th century to protect the harbour.

During the Turkish occupation, the lighthouse fell into disrepair and was eventually rebuilt between 1824 and 1832 in the form of a minaret. The modern lighthouse is often referred to as ‘ Egyptian’ because it was built during a time where Crete was occupied by Egyptian troops who were supporting the weakening Ottoman Empire against the “rebellious” Cretans.

The ‘Egyptian’ lighthouse was leaning badly due to bombings during WWII and earthquakes but it was extensively renovated in 2005 and now – believe me – looks as good as new!

The lighthouse is located at the end of a long mole that protects the Venetian harbour from the sea. It is well worth walking all the way to the end of it as you get splendid views from the harbour! Unfortunately, the lighthouse is closed so you can’t go up the tower. 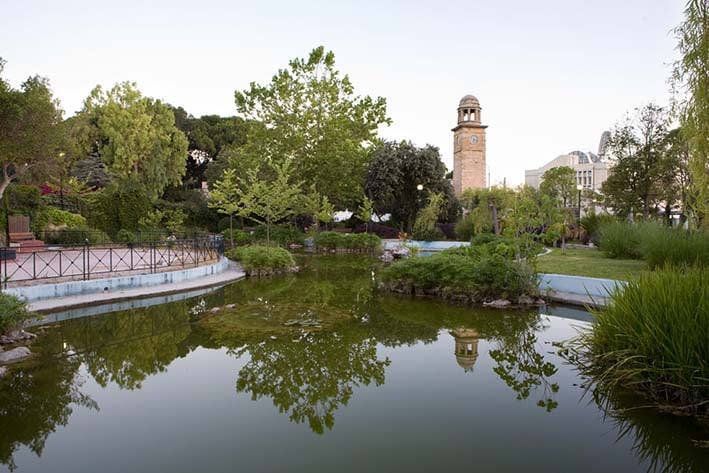 It’s been made by Reuf Pasa and it was designed in 1870 according to European gardens and has been planted with several trees and plants! At the northeastern side, you can observe the fabulous clock, which was built in 1927. It is considered as one of the most memorable buildings of the city.

You can enjoy your coffee or tea at the historical café Kipos, which is also a member of the European association of historical cafes! And I will give you an extra tip. Inside the municipal garden, there is also an open-air cinema!

The garden is free to enter.

#Don’t forget to get some local products from the Municipal Market! 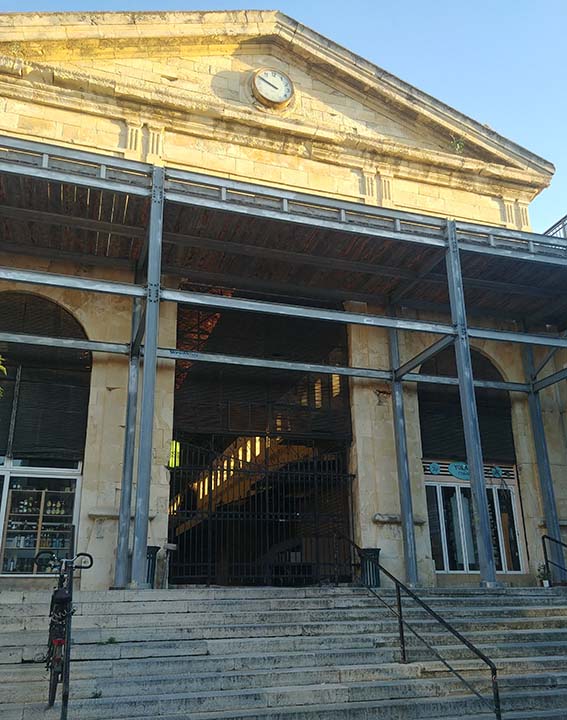 In the centre of Chania city, you will find the Municipal Market, where the main bastion of the fortifications stood in Venetian times. Up to the late 19th century, this was the edge of town! There were butchers’, fishmongers’ and grocers’ shops, inns, etc.

Initially, this market wasn’t very nice, so in 1908 the Municipality of Chania decided to improve the area by building a covered municipal market. Building work began in 1911, according to the plans of local engineer Drandakis, modelled on the covered market of Marseille.

Unfortunately, a large section of the Venetian walls had to be demolished in order to modernise and develop the city. The market is open during the shops’ opening hours and it is free to enter. 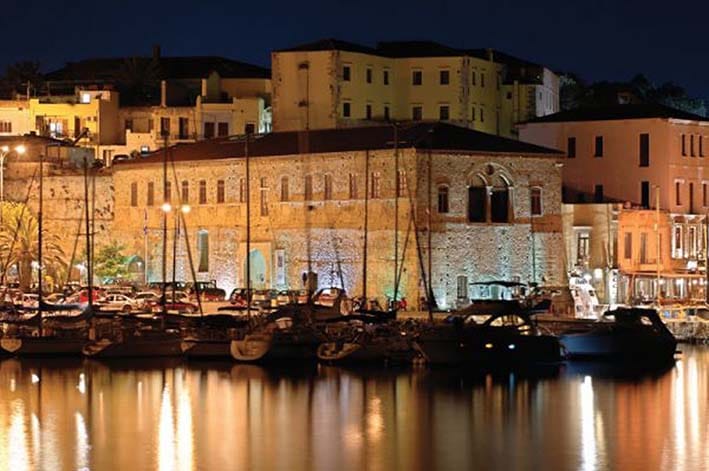 The construction of this Grand Arsenal started in 1585 by the Intendant Alvise Grimani. A new era began for the Grand Arsenal with the addition of the second floor in 1872 during the Turkish period. The building hosted several important public services and authorities.

Nowadays, it has been transformed from a roofless ruin into an impressive building that hosts various events and exhibitions. Since 2002, after its reformation, it hosts the Center of Mediterranean Architecture, organizing important cultural events, art exhibitions and international events related to architecture. The working hours are 08.00 – 15.00 and the entrance is free.

During the Venetian occupation (1204 – 1669), the need for the closer presence of Venetians in Crete made them construct a large number of “Neoria” (arsenals) in Chania, where the ships would be repaired during the winter. The construction of the first two “Neoria” in Chania was completed in 1526. In 1593, sixteen “Neoria” had already been constructed!

In 1599, the south “Neoria” complex was completed with the construction of the 17th “Neorio”.  During the Turkish period, the lack of maintenance in the port resulted in the alteration of the original function of “Neoria” which were now used as military storage spaces. From the initial “Neoria” complex with 17 “Neoria”, nine were demolished.

Nowadays, a group of 7 continuous domes is preserved-along with another one further to the west, the “Great Arsenali”. Only two “Neoria” are preserved intact from “Moro” complex, at the heart of the port. 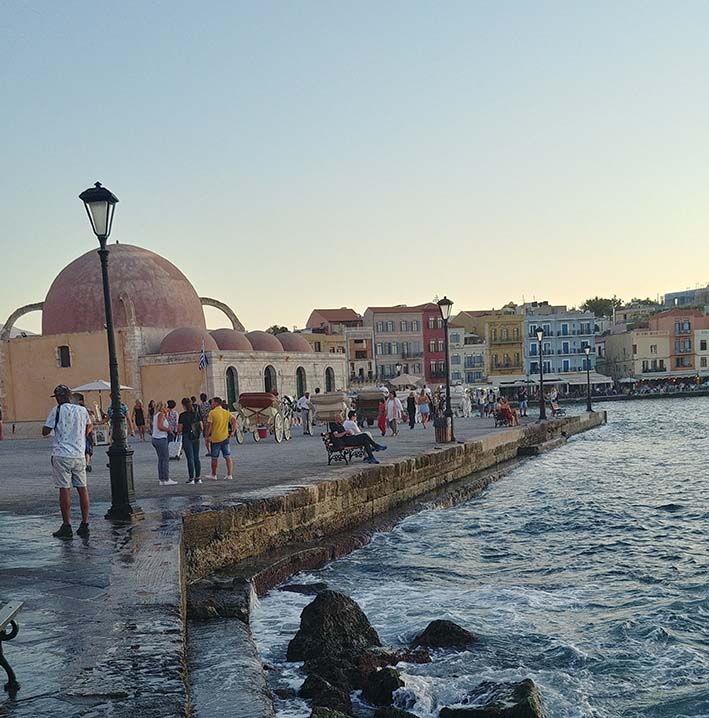 Giali Tzamisi is a unique preserved Mosque of the city and was built during the second half of the 17th century. It is located at the heart Venetian Port of Chania. If you walk around the old harbour you won’t miss it, as it is one of the most characteristic buildings of the old port of Chania.

It was built to honour the first Sergeant of Chania, Kioutsouk Hassan. Nowadays, the Mosque has been totally renovated and is used as a place for events and exhibitions mainly during the summer period.

#Have a look at Firkas Fortress and Maritime Musem!

The fortress Revellino del Porto on the northwest side of the port of Chania was constructed by Venetians to prevent any enemy danger for the port.

The interior was organized to barracks and ammunition storage areas. It was also the headquarters of the Army Commander of the city. In about the middle of the courtyard, there is a large domed water tank that gathered rainwater from the roofs. On the northern side of the wall, there are six arched openings that included cannons for the protection of the entrance of the harbour.

Today, at the entrance of the Fortress is situated the Maritime Museum of Crete.

Here are the tombs of the Greek politician and 7 times prime minister of Greece Eleftherios Venizelos and his son Sofocles Venizelos, who also was a prime minister of Greece from 1943 to 1952. The location offers the greatest panoramic view of the city. This is a special place for Greeks, as El. Venizelos changed Greece, as very few politicians ever did. Note that is open 24 hours, with free entrance. I recommend this to be part of your journey, as you only need to be there for about half an hour.

And if you are a museum kind of person, then check these!

The Archaeological Museum of Chania was founded in 1963 and the collection of the museum includes findings from excavations in several areas of the city that have been performed during the last 50 years, and its exhibits cover the cultural history of Chania from the neolithic period till the Roman Empire.

All of the exhibits are placed according to the subject or the location they were found. The Archaeological Museum 66 216of Chania organizes temporal exhibitions, educational programms and various cultural events during the whole year in order to protect the cultural history of Chania in the best possible way, constituting an attraction for many visitors.

The Folklore Museum of Chania is located at the centre of the old city of Chania. It includes folklore and traditional exhibits that allow the visitor to imagine the way of life of the residents of the island during the 18th and 19th century.

Among others, in the museum, you will find a collection of tools and raw materials of traditional products. There are also representations of home arts, craft-based work as well as representations of the interior of a rural house. Quite interesting – at least for me! –  is the workshop of the museum that revives the Cretan embroidery art. 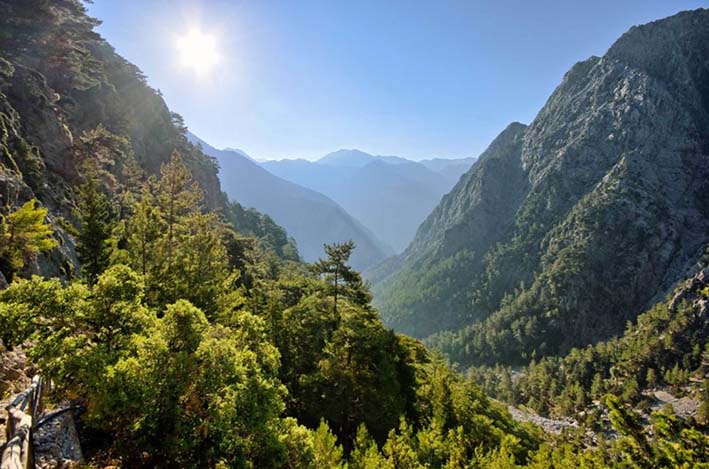 I think this is one of the must-do if you love outdoor activity! It can be quite challenging but believe me it is totally worth it! If you want my advice, get some hiking boots and it would be better if you don’t plan any “tiring” activity the next day, as Samaria Gorge is the longest gorge in Europe! More information here!

Enjoy a Day Trip to Elafonisi Island from Chania 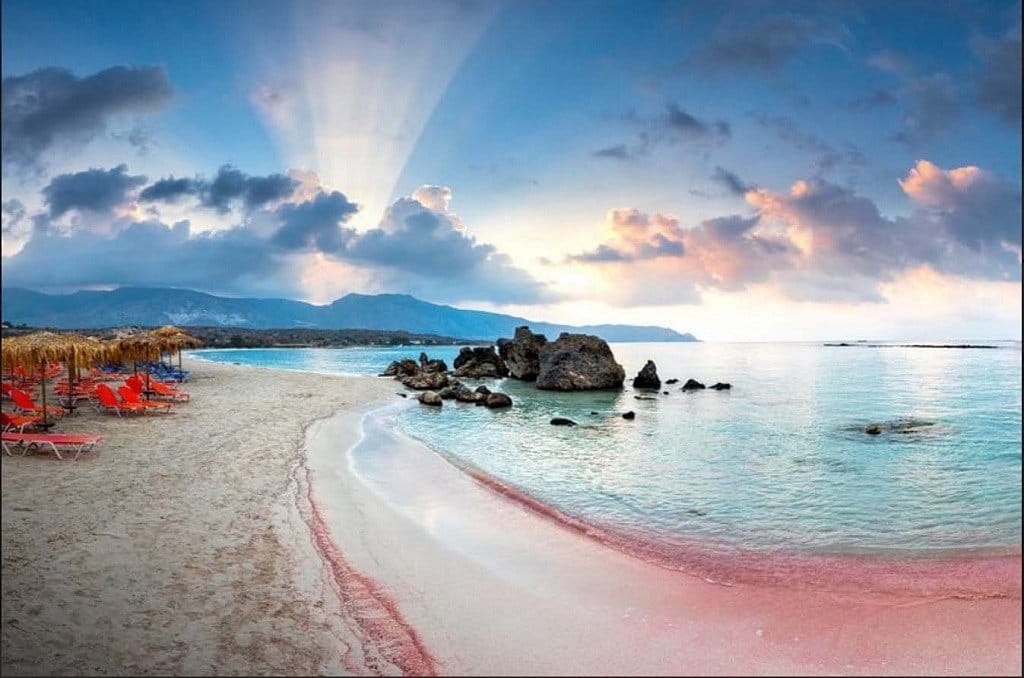 If you don’t have any transportation mean to reach this amazing beach or you want to avoid driving there, then this tour is perfect for you. You will travel through the impressive Topolia Gorge and pass many traditional villages, like peaceful Elos and arrive on the island of rare beauty Elafonisi. More information here.

If you are looking into some different than lying on a beach (there is nothing bad with that by the way!), then you can select this tour! You will sail to nice beaches, discover what lies below the surface of the water and get some marvellous views of the Cretan coastline. More information here.

This is a 7-hour tour in the Apokoronas region and you will experience great tastings from local wine and cheese and you will get an overview of the Cretan ancient way of life. and in the end you will enjoy a traditional Cretan lunch at a local tavern. More information here.

The Miracle of Wine and Olive Oil: Day Tour from Chania

On this tour, you will find out more about two of the best local products in Crete. Wine and the famous Olive oil.  Personally I really amazed by the olive oil factory, learn more about the ancient olive trees and enjoyed the vineyard tour. It is very well informative and they give you enough time to enjoy each of these places, which is not as common as you think! More information here.

Our 8 days itinerary in Chania region, in Crete! 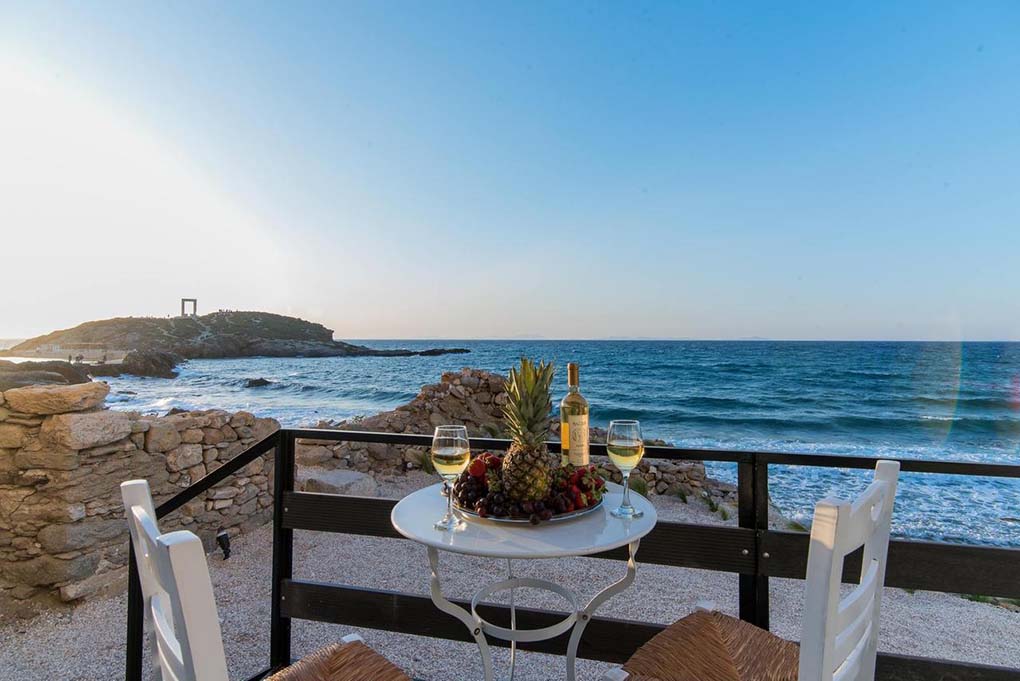 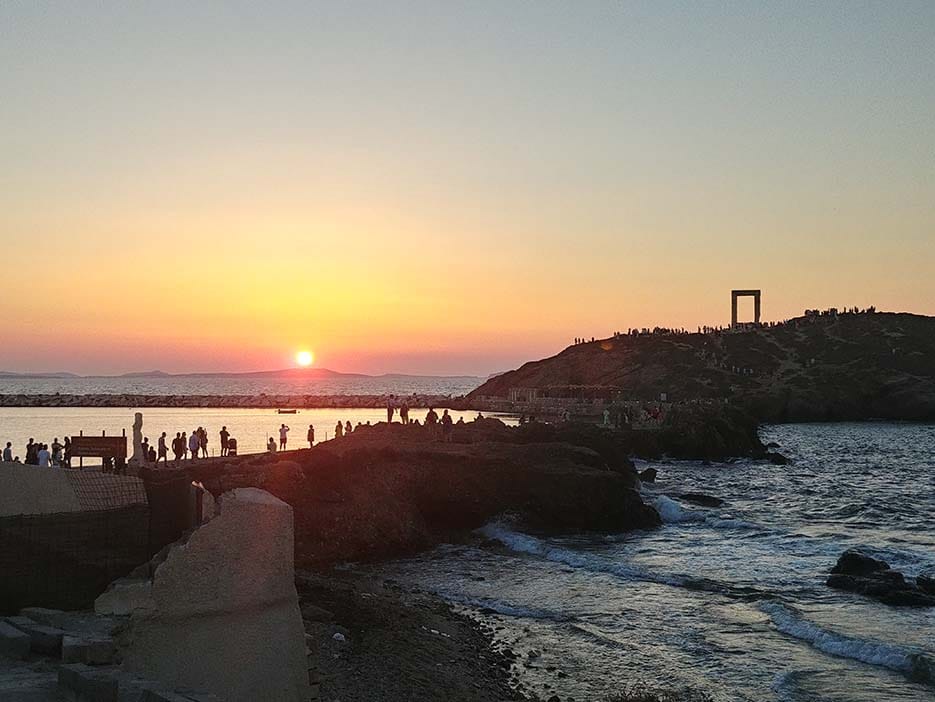 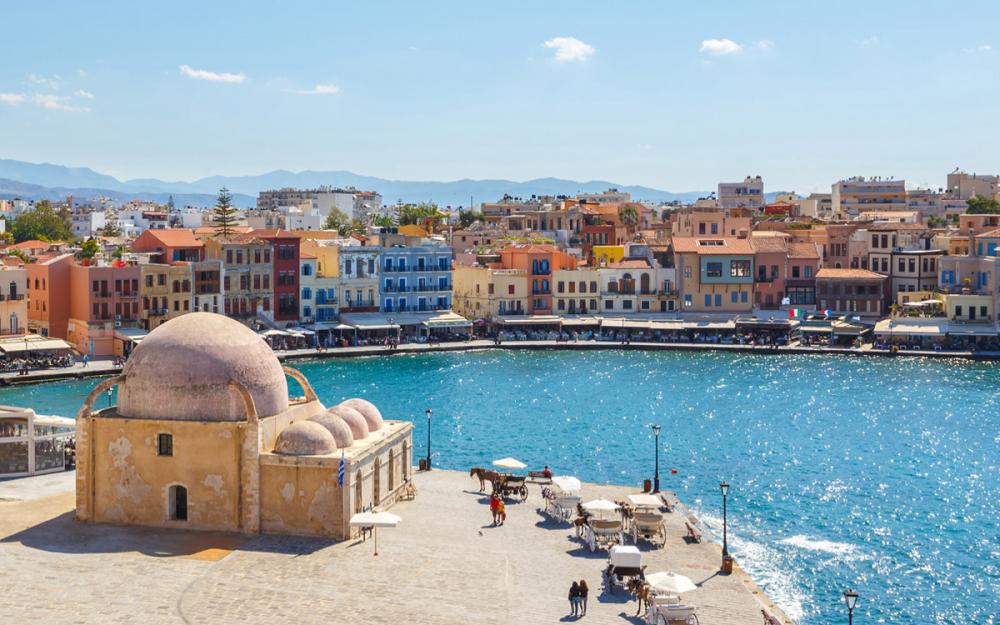 Subscribe to our newsletter and get our newest updates right on your inbox.