So, you are in Athens and you have limited time but you want to know new places close?

We have the solution for you, no worries! Short day trips to islands, mountainous village, archaeological sites and much more!

You have to rent a car and only 1.5-hour drive away from Athens you will visit the mountainous part of Korinthos, Ziria, where you can through fir and oaks forests and find lakes, rivers and beautiful hidden traditional villages. Some of them are the Ano, Mesi Sinikia and Kato Sinikia Trikala (see below map), which with the sound of running waters offer panoramic views of the Corinthian Gulf! A necessary stop should be the village Goura, which has a nice beautiful main square where the church of the Archangels dominates from 1880. A non-missed highlight of Ziria is a very small lake that was created in 1997 and is surrounded by a mixed forest of fir, oak and pine. You will walk on the narrow strip of land to the church of Saint Fanourios – which is in the middle the lake – and also you should ascend to the Monastery of St. George. which very close and has a magnificent view of the lake! 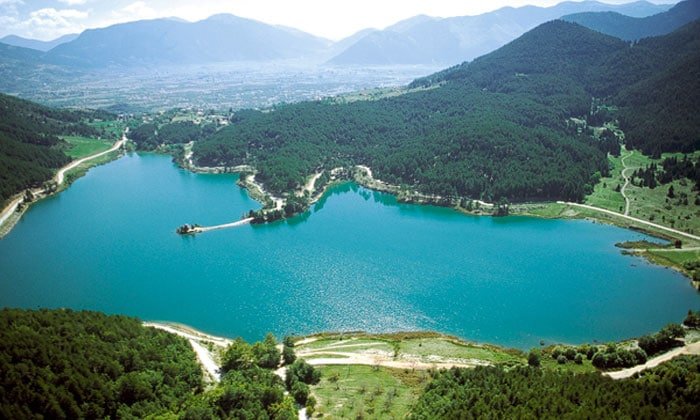 Nafplio has one of the most beautiful castles in Greece, it is just 1,5 hour away from Athens and it was the first capital of Greek State after the revolution of 1821. The preserved architectural character and the two castles, Akronafplia and Palamidi give to the city a historical and unique atmosphere. If you are athletic enough, you can climb the 999 steps to the imposing Palamidi castle and admire a magnificent view of the sea and to the small barren island Bourtzi! The beautiful photo comes from Andreas Tsonis ( CC BY 2.0) 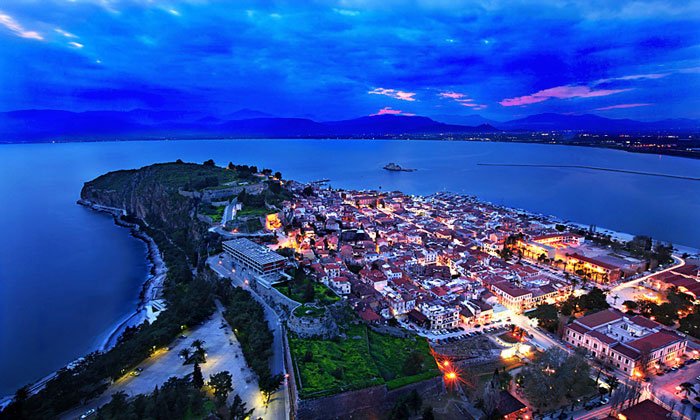 You can take your camera and also visit Akronafplia, which is the oldest part of the city. From there the view is equally impressive, and you can follow the idyllic pedestrian Arvanitias that surrounds the rock of Akronafplia.

Restored mansions are everywhere in the old town of Nafplio and you should spend some time just walking around. The main pedestrian street of Vasileos Konstantinou has become a reference point and leads to Syntagma Square, the meeting point which is strongly reminiscent of an Italian piazza. 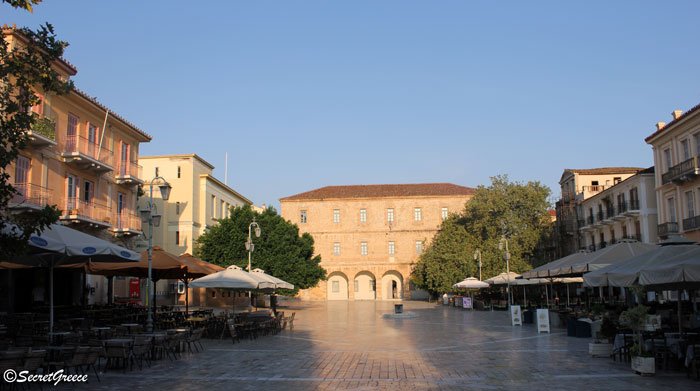 There is the Archaeological Museum, the parliament which housed the first parliament of the independent Greek state and the Old Mosque.

Hydra is one of the most scenic and atmospheric islands of the Saronic Gulf, ideal for romantic weekends or day trips! The architectural structure has been maintained the same until the early 19th century. The port is the heart of the island and … the only village! You should wander around the alleys and amazing traditional houses and boutiques hotels.  There are many choices for walking, starting from the port to the Historical Archive and the Port Authority or to Kiafa and the mansions of Kountourioti and from there, along with the coast to the cave, the Mills and Kamini. A quick tip. If you do not do well with walking and stairs, then it would be wiser to choose another island, as no cars are allowed on Hydra! Point of interests are also the churches: the Monastery of the Assumption οf the Holy Mary and the churches of St. John the Faster with 18th-century frescoes and Saint Constantine of Hydra. If you want to go to a beach, let me highlight to you that in Hydra you won’t find any incredible beaches, but some decent one like Mpisti and Agios Nikolaos, where you go by taxi boat. Τhe quickest way to go to Hydra is by flying dolphins (1.5 hours from Piraeus, book tickets here ) or by car, which is a 2.45′ drive from Athens to Metohi and then with a taxi boat, you arrive at Hydra. 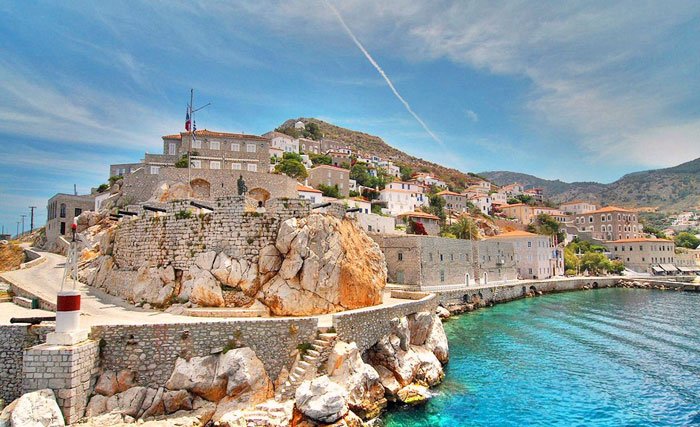 Delphi was famous in ancient times thanks to the famous oracle of the (ancient) city of Delphi and nowadays continues to attract visitors from every corner of the world! It is accessible by car and it is around 2.30′ drive from Athens. You can select this tour if you don’t have a car, which provides the guide and the transport to Delphi! Coming from Athens you will meet the beautiful Greek village Arachova, where you can drink a quick coffee or eat and then you will see the archaeological site of Delphi.

The main road split the site into two different parts. One, above the road, is the largest one. You will start walking through the Sacred Road where was the route followed by the ancient pilgrims and had adorned with numerous buildings and offerings (the treasure of Sikyonion, Siphnian of Megara, the Athenians and many many others). Then you will face the Temple of Apollo, the site where according to tradition the priestess Pythia, who she muttered words incomprehensible to mere mortals. These words are then interpreted by the priests of the sanctuary in a common language and delivered to those who had requested them. Nevertheless, the oracles were always open to interpretation and often signified dual and opposing meanings! 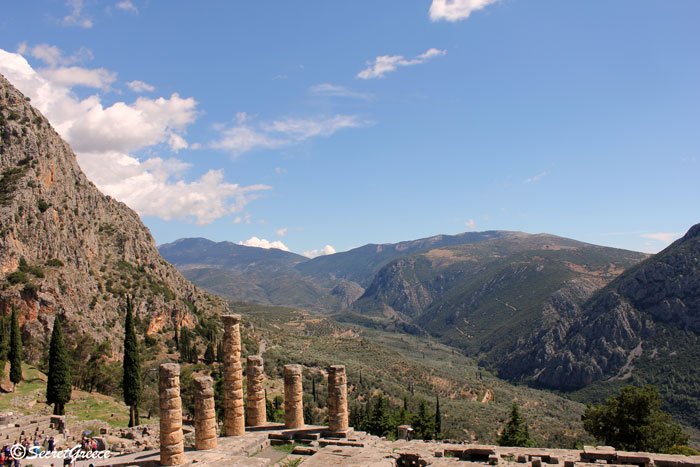 After that, you will find the theatre and follow a steep path you will get to the stadium. The archaeological walk ends at the museum, which presents the most famous discoveries of archaeological research.

The second part which is below the road is the sanctuary of Athena Pronaia, where you will find a group of temples and treasuries and also the famous Tholos of Delphi. 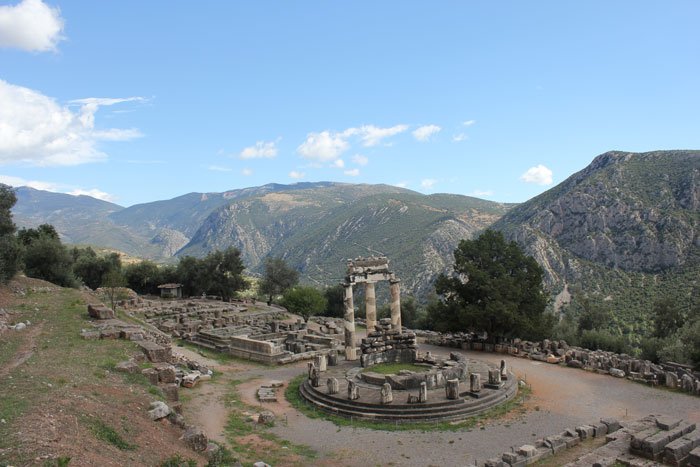 The modern town of Delphi extends further to the ancient, but due to the geographical position is not visible from it. I am afraid it has not kept any particular architectural character but offers excellent views of the olive grove of Amfissa and the bay of Itea.

The archaeological site of Sounion is located in the southernmost of the Attica prefecture and it’s around 1.15′ drive from Athens, but just for your information sometimes there is traffic! Again if you don’t have a car, you can select this tour which is very informative and it can be quite romantic as Cape Sounio is best known for its spectacular sunsets!

The coast is rocky and steep. At Cape Sounion, Athenians built a sanctuary surrounded by a wall. The sanctuary included temples dedicated to the gods of the city and the main temple was dedicated to Poseidon, god of the sea and it was built in ca. 440 BC.

This site also is involved in the reason why the part of the Mediterranean Sea that is located between the mainlands of Greece and Turkey is called Aegean sea. According to mythology, King Augeus jumped from Sounion cape, when he thought that his son Theseus was killed by Minotaur in Crete! It is a magical place and if you don’t have too much time to spend on a day trip, I think Sounion temple is your best choice especially if the weather is nice! You can find more information about the archaeological site here. 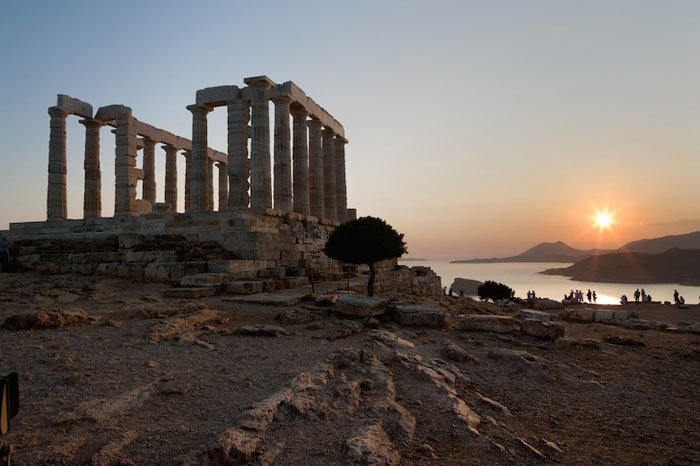 If you are interested in visiting one of the above places, but you prefer to go with a tour agency, just contact us and we can recommend you some good choices!

Also, we have gathered a list of the hotels in Athens, so if you are looking for accommodation, just check here!

The BEST Honeymoon Destinations in Greece!

Where to stay in Halkidiki region!