SecretGreece has done something that had never happened before in Greece!! We went an 11 days road trip in Greece focusing on the mainland (I am afraid no islands)!! We spent the first 3.5 days in Peloponnese where we visited among others, Epidaurus theatre, Nafplio town, Lakonian and Messinian Mani, Olympia archaeological site and much more! Then, we directed to West and North part of Greece, where we visited undiscovered mountainous Nafpaktia, Trichonida Lake, Nikopolis, the largest ancient Greek city, Parga, Kastoria Lake, Nymfaio village, Edessa waterfalls etc. Now, after a short stay at Thessaloniki, a personal matter that happened obliged us to change our plans and instead of going east towards, Drama, Xanthi and Kavala as planned, now we are heading to Central Greece.

After 9 days of road trip and driving for so many kilometres, we were more and more tired. The last 2 days are quite relaxed and we have left some historical places to visit. We left from Thessaloniki and we passed from Veria town. We briefly walked around the city visiting the public library, which in 2010 received the “Access to Learning” Award of the Bill and Melina Gates institution. Also, we went around the Jewish Synagogue and the twin baths! Don’t forget to try the local sweet “ravani”! Unfortunately, we didn’t have time to visit Vergina, which is one of the most important archaeological sites in Greece! The tomb of King Philippe the 2nd, the father of Alexander the Great, was found there, as well as the gold urn with his bones! A must visit! But we didn’t have time even for that! After that, the only stop for the rest of the day was the -out this earth- Meteora! We cannot say too much about this area! From the first time that we took the turn on the road and these stunning rocks formations started to be revealed, we were amazed!

The unique and stunning rocks of Meteora, which embrace Kalambaka town, are included in the UNESCO World Heritage List and it is the largest monastic city in Greece after Mount Athos! It’s located about 25 km from the city of Trikala and according to geologists, these ”weird” tectonic formations were created 30 million years ago when the sea which covered the area, began to decline. The way that these rocks stand for thousands year creates a magical landscape. This was the reason that led the monks to find the “right” isolated place for their monasteries.

Our friend Penelope from Meteora Guided Tours advised us about one “easy” path from Monastery of Holy Trinity to Church of Virgin May. But we did the opposite route! We left our stuff at the hotel and we quickly drove to the church of Virgin Mary. From there we found the path easily and started to hike. 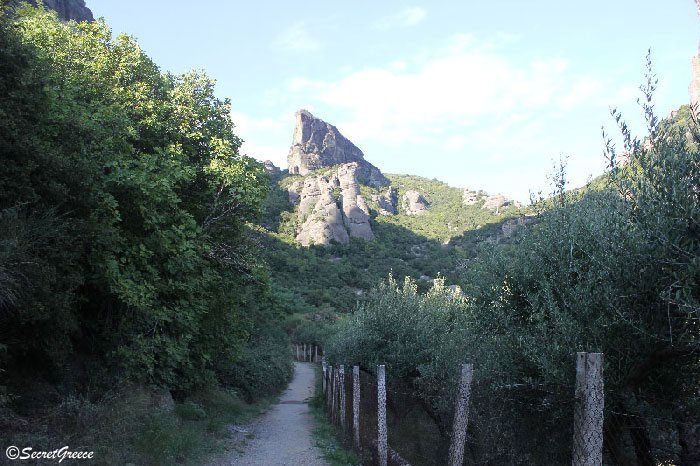 The views were breathtaking and we enjoyed every moment!! 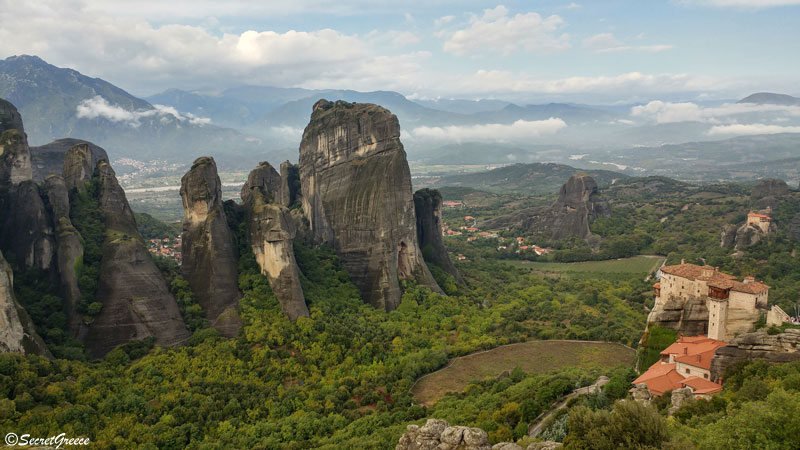 But the hilly slope of the route was killing us!! At the end of the path, the beautiful monastery of Holy Trinity was revealed! But, unfortunately, the monasteries have a strict timetable and it was closed!

The weather wasn’t our ally and it was raining lightly but this didn’t prevent us to try to visit some of the monasteries. There will be a separate post about the monasteries, but the whole feeling was really stunning. We were looking at this landscape and we were feeling that the mountains and rocks reflected back our souls and free our mind. It was a unique emotion. It is totally different to see photos on your screen than being there, smell the air, see the colours and listen to nature’s sounds. But we had to continue our journey. This time, next stop was Lake Plastira. 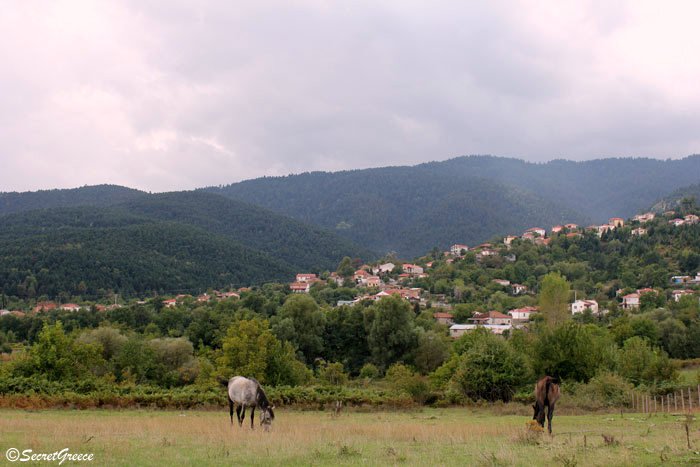 We headed directly to beautiful Neochori -the most developed village, which offers panoramic views of Lake Plastira. Also, we check the village Kalyvia Pezoulas, which widely known as the “beach”! The whole landscape reminds relevant places in central Europe and Switzerland! But this was a raining day and we couldn’t enjoy the various hiking paths and the wide range of activities that we could experience there. Hiking, horse riding, canoe kayak, camping are only some of the offering activities in this magic place! But as I said the weather was against us, so we headed to Pelion for our last overnight stay of this long road trip!

Mount Pelion or Pilio in Magnesia, in Central Greece, rises up from the city of Volos and stretches across the Pelion peninsula with the Pagasitikos Gulf on one side and the Aegean Sea on the other. In Greek mythology, the mountain was the summer residence of the gods and home of the Centaurs! We stayed at Portaria, a village 20 minutes away from Volos city. We left our luggage at the hotel and we went for a quick walk to Makrinitsa, a village that is called the balcony of the Pelion due to the amazing views!

And after a quick walk in Volos, we went back to Portaria and we had our last dinner at Kritsa restaurant.

Last day of our road trip with mixed emotions! From one hand we had an incredible experience with so many different places, landscapes and people but on the other hand, the whole trip was quite exhausting! But there wasn’t time to think too much as Delfi archaeological site was expected us!

First stop at Eptalofos, one village not so well know yet but beautiful and quiet. 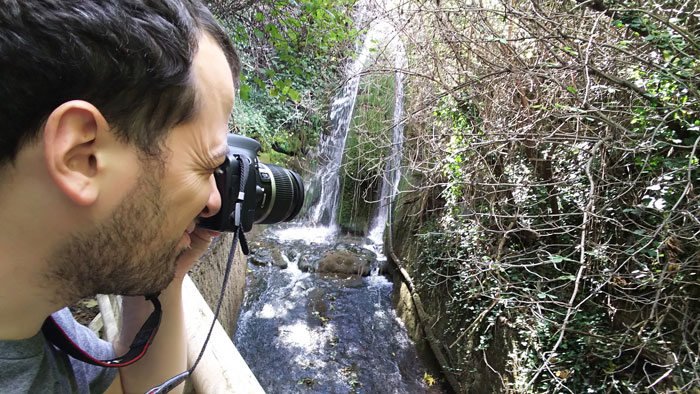 And then, we arrived at Delphi. It is a unique place and we felt immediately a special feeling which is difficult to describe with words!

Famous in ancient times thanks to the oracle of the ancient city of Delphi continues to attract visitors from every corner of the world and it has easy access from Athens (two and a half hours). With background vertical cliffs facing the Fedriadon and the olive groves of the valley pouring Pleistos to Krissaios field, the archaeological site unfolds both sides of the main asphalt road. On the upper side the walk begins from the Athena Pronaia, where there are the mysterious dome and Lyceum on the left side of the road and then continue along the Sacred Way, that is the route followed by the ancient pilgrims, and adorned with numerous buildings and offerings (the treasure of Sikyonion, Siphnian of Megara, the Athenians) etc. 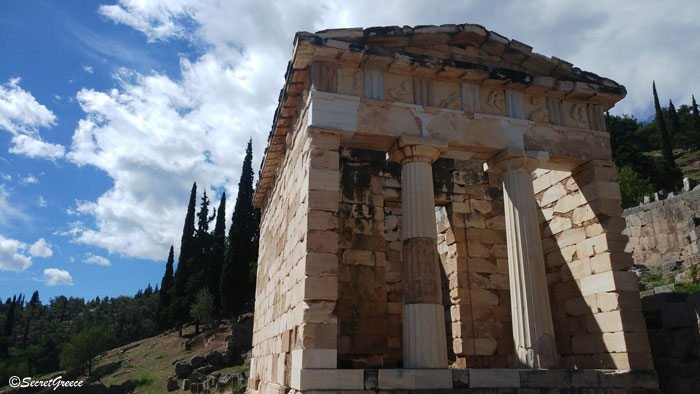 The below bags, glasses etc are apparently not the treasury of Beotians! Some woman thought that it was better to leave them and enjoy the archaeological site!

Then we arrived at the beautiful at the Temple of Apollo, the site where according to tradition the priestess Pythia was saying in a state of sacred intoxication some unintelligible oracles! 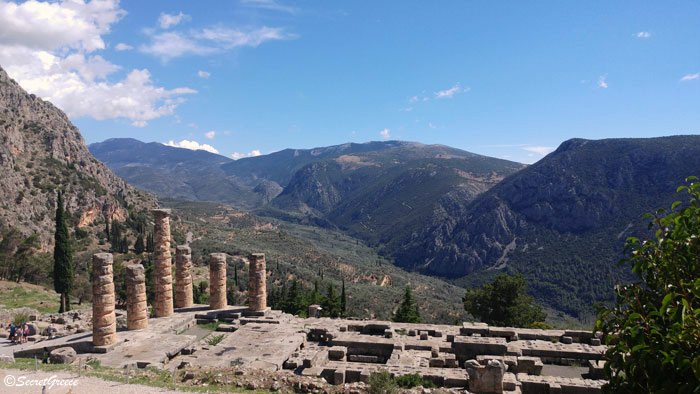 After that, we found the ancient theatre while following a steep path after 15 minutes we got to the stadium.

The archaeological walk ends at the museum, which presents the most famous discoveries of archaeological research. The modern town of Delphi extends further to the ancient, but it has not kept any particular architectural character but offers excellent views of the olive grove of Amfissa and the bay of Itea.

So, we were heading back to Athens, with one quick and necessary stop at Arachova, one of the most beautiful mountainous village in Central Greece. It was an amazing trip around this small country. It was unexpected even for us as well to see so many hidden corners and aspects of Greece that remain away from the industry of tourism. These parts of Greece remain unspoilt and remind images from another era, a little more difficult but maybe a little bit more original! 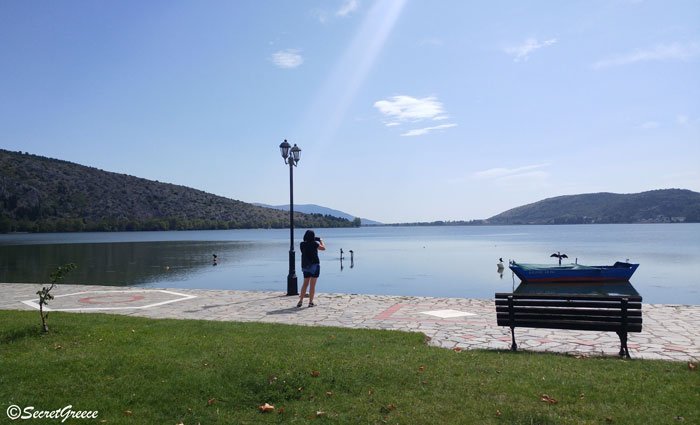